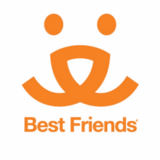 Save Them All
Animal Protection and Welfare | Los Angeles, CA |

Best Friends Animal Society is the only national animal welfare organization focused exclusively on ending the killing of dogs and cats in America's shelters. An authority and leader in the no-kill movement since its founding in 1984, Best Friends runs the nation's largest no-kill sanctuary for companion animals, as well as life-saving programs in partnership with rescue groups and shelters across the country. Since its founding, Best Friends has helped reduce the number of animals killed in shelters from 17 million per year to 4 million. No other animal welfare organization has the knowledge, technical expertise and on-the-ground network to end the killing and Save Them All™.

Best Friends is working collaboratively in Los Angeles with animal rescue groups, city shelters and passionate individuals who are all dedicated to the mission of making Los Angeles a no-kill city. As part of this mission, Best Friends hosts adoption and fundraising events such as Strut Your Mutt and NKLA Adoption Weekends, runs both the Best Friends Pet Adoption & Spay Neuter Center in Mission Hills and the NKLA Pet Adoption Center in West Los Angeles, and leads the NKLA initiative.

NKLA (No Kill Los Angeles) is a coalition of animal welfare organizations, city shelters and passionate individuals, led by Best Friends Animal Society. NKLA is dedicated to ending the killing of healthy and treatable pets in L.A. shelters by providing spay/neuter services where they are needed most so fewer animals go into shelters, and increasing adoptions through the combined efforts of the NKLA coalition so more animals come out of the shelters and go into new homes. Since the NKLA initiative began in 2012, shelter deaths in the City of Los Angeles has decreased by almost 50%.

At the heart of Best Friends is the Sanctuary, where, at any given time, about 1,700 animals are turning their lives around, receiving the medical help they need, and getting love and acceptance to help them overcome their past. While searching for their forever homes, they live in a scenic, healing environment among human and animal friends.

Best Friends owns nearly 3,700 acres, and we lease another 17,000 acres of state and federal land. Nearly 30,000 people visit every year to meet the animals and tour what has become the nation's largest no-kill sanctuary for companion animals. Learn more about the Sanctuary.

The ability to Save Them All can only be achieved when like-minded organizations and individuals come together. Best Friends works collaboratively with other groups, government, and regular folks throughout the nation. Our outreach programs get to the very root of animal homelessness nationwide.

Best Friends' No More Homeless Pets Network brings animal shelters and rescue groups together from across the country to hold mutual adoption events, public education campaigns, and fundraising drives. Working together, these groups are able to save many more lives than they could in isolation.

We are a proud participant of Shelter Animals Count (www.shelteranimalscount.org), a nonprofit organization dedicated to creating, sharing and stewarding a national database of sheltered animals that provides facts and enables insights to save lives.

Puppy mill initiatives: Best Friends is working hard to combat puppy mills, one of the major contributors to animal homelessness, through public awareness campaigns, legislative work, and encouragement of adopting rather than purchasing pets.

Cat initiatives: Cats comprise the majority of animals dying in shelters - up to 70 percent in some places. Most of these are community cats (stray and free-roaming). Best Friends is working to save lives by implementing innovative trap/neuter/return programs across the country. Some of the most successful to date have been in Los Angeles, California; Salt Lake City, Utah; Jacksonville, Florida: San Antonio, Texas: and Albuquerque, New Mexico. These programs have helped reduce cat shelter deaths by as much as 65%.

Pit bull initiatives: Like cats, pit bull terriers comprise a disproportionately high number of animals dying in shelters. At Best Friends, we fight breed-discriminatory laws, and work hard to change the image of the pit bull terrier nationwide through Neighborhood Pit Bull Days, advertisements, and more to give these dogs the chance to make it out of shelters and into the arms of loving families.

From humble beginnings, Best Friends Animal Society has grown into a national leader in the no-kill movement. But the future lies in the same place that it all began - with caring individuals who want to make this a kinder nation for our pets. It's people like you who started it all, and people like you who will help us to Save Them All!

Best Friends Animal Society has not yet activated their merchant account with Givsum. Your donation will go to the GIVSUM Foundation who will issue a check to Best Friends Animal Society ( less applicable fees ) as a grant within 30 days. You will get a tax receipt for the full amount of your donation from the GIVSUM Foundation, which you may use for your tax purposes.